We were proud to help last summer with the App Camp for Girls non-profit, which seeks to inspire young girls into STEM (Science, Technology, Engineering, and Math) careers through mentorship around creating their very own iPhone apps! We photographed the event and you can see some of the photos on the App Camp site. This was a great opportunity to help a local non-profit, one which was named Portland’s best new non-profit by Portland Monthly Magazine! Check ‘em out.

My Wild Neighbors show is now on display at Tin Shed in Northeast Portland, a cafe and constant supporter of artists for over ten years. Go grab a bite (I love their breakfast) and check out some local wildlife portraits at the same time. I’m very excited to announce that my Wild Neighbors show is currently on display in Ecotrust’s Jean Vollum Natural Capital Center in Portland’s Pearl District through the middle of September. Next to my past shows at Blue Kangaroo Coffee Roasters near Oaks Bottom and at Oaks Bottom Wildlife Refuge itself, the Ecotrust building is perhaps the most fitting venue for this show as Ecotrust’s mission is “to inspire fresh thinking that creates economic opportunity, social equity and environmental wellbeing”. I’ve attended several environmentally-focused events at the building in the past and even the building design and operation is focused on conservation.

The show is in the hall gallery on the second floor, outside the Billy Frank Jr. Conference Center. You can check out the event space calendar to plan a time to stop by.

And as always, keep your eyes on the events page for more details of upcoming shows and events.

A few weeks back, I had the great opportunity to attend a wildlife track and sign course in the southern Washington Cascades near Mount St. Helens. This overnight course was put on by the Mount St. Helens Institute and led by none other than renowned local tracking expert David Moskowitz. This was an awesome opportunity to improve upon, as well as test, my tracking skills while also seeing some great scenery and meeting some new friends. Photo of me by David Moskowitz

Dave has a nice writeup on his blog as well with the above photo and several more. I very much look forward to the next chance to improve my skills like this. Any time I can spend in the field with experts like Dave is time well spent. I’m pleased to announce that my latest showing of Wild Neighbors is at Pro Photo Supply’s imaging lab, running throughout the month of June. Stop by anytime from 8:30am until 6:00pm during weekdays or Saturdays from 9:00am to 5:00pm. The lab is located at 1815 NW Northrup Street in the Slabtown neighborhood, just off of I-405 and around the corner from Pro Photo’s retail location.

Every one of these photographs was made within Portland’s city limits. Many of these creatures, all of them wild, spend their days physically closer to our daily lives than some of our friends and family. We share the same city, cross the same waterways, and compete for the same resources. With these images I hope to bring that reality closer to our foreground awareness. Whether we see them or not, they frequently see us.

Check back soon for more shows or watch the events page.

Update: Head over to Pro Photo’s blog post on the show.

It’s been a long, busy Spring, but here we are on the edge of Summer. Hard to believe that it’s June already.

I’ve got more news to share soon, including three shows lined up into the Fall, plus I’ve been traveling. Unfortunately, currently this is for family emergency reasons, but I also had the great fortune of taking an amazing trip to Costa Rica in April. I’m also pleased to be photographing the State of the Map US conference in San Francisco next week, as I did last year. I enjoy certain types of event photography as well as outdoor pursuits, so this will be a fun project.

Stay tuned for more on the events page very soon.

For now, I’m hoping to spot another grey fox or white-tailed deer, as I have in the past day, from where I’m staying.

Photolucida presents Then. Now. Here. a slideshow celebration of Oregon – its people, its landscape, its unique character and special history. Curated by Oregonian photographer Motoya Nakamura, the slideshow includes images by contemporary Oregon photographers paired with historic images of the beautiful state we call home.

The photograph of mine that was selected was taken this winter in the Mount Hood Wilderness on a snowshoe hike to Lower Twin Lake. You can see what the lake looks like in the warm seasons in this Oregon Wild info brochure.

I’m excited to be part of this exhibit, plus the photos will be retained permanently by the Oregon Historical Society. The opening event of the exhibit is on Wednesday, April 3, from 8:00 to 9:30pm at the Oregon Historical Society, 1200 SW Park Avenue, Portland. In addition, there will be a number of later venues for the show throughout Portland. For more info, see the exhibit website.

The weather turned out to be beautiful for the Oaks Bottom Trail Re-Opening ceremony back on March 9th – plus we had some surprise guests, ranging from Portland Mayor Charlie Hales to a red-tailed hawk! The speeches and ribbon-cutting ceremony were well-attended, as were the info tents staffed by volunteers. Represented at the event were Portland Parks & Recreation youth programs, Portland Trackers Earth, the Audubon Society of Portland, and native wildlife photo displays by Nelson Nature Photography, Mark Wykoff, and myself, featuring many dozens of photos taken in Oaks Bottom Wildlife Refuge.

I had a great time talking to people about native wildlife, how to better your chances of seeing them, and the sorts of interactions that take place between species in the refuge. People young and old were curious about our wild neighbors and it was a great way to show off the newly-refurbished trail. The crowd awaits the ribbon-cutting ceremony 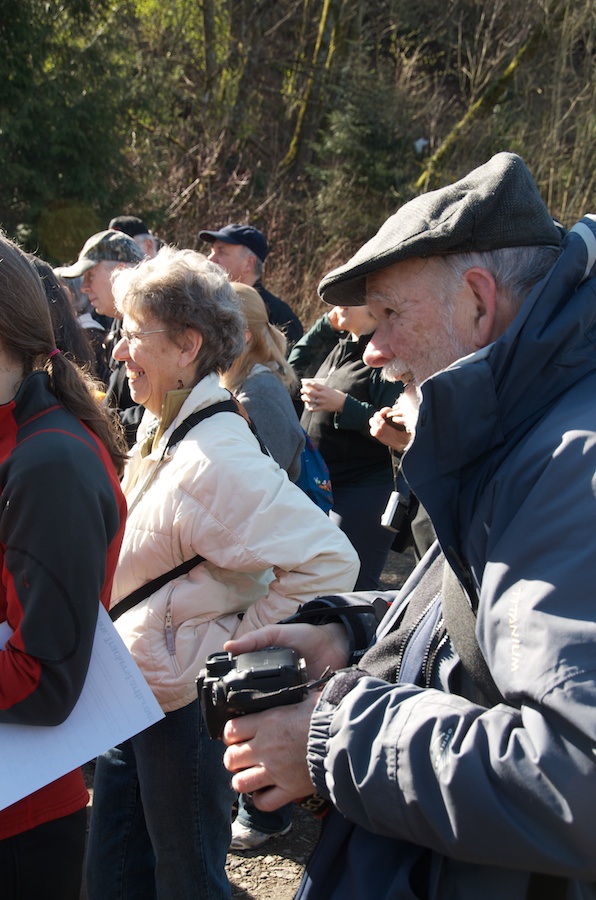 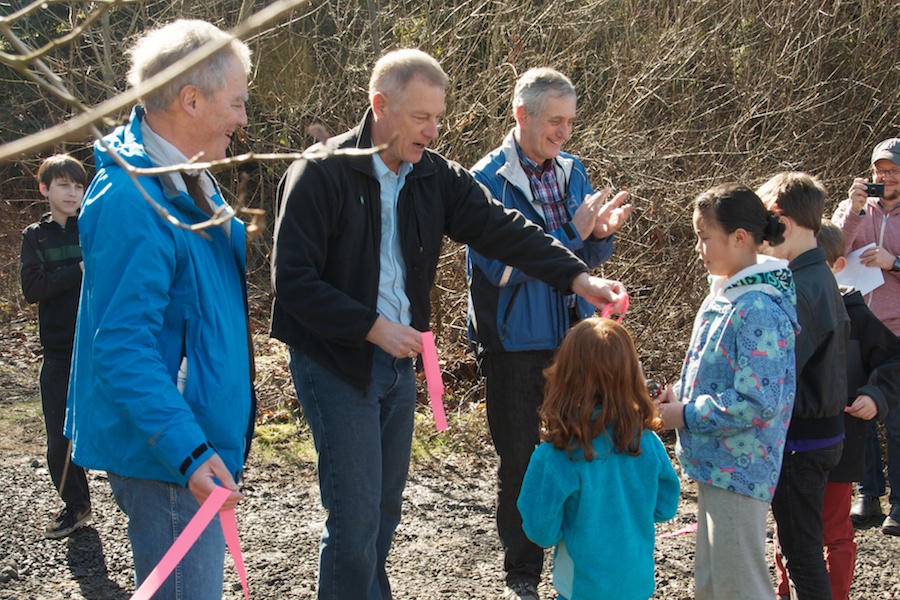 The ribbon-cutting was performed by children with pruning shears 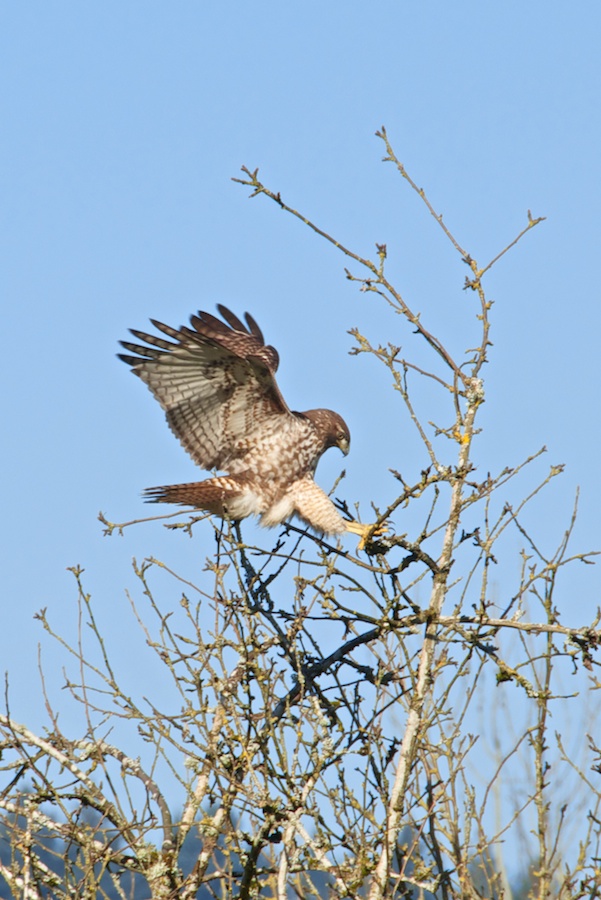 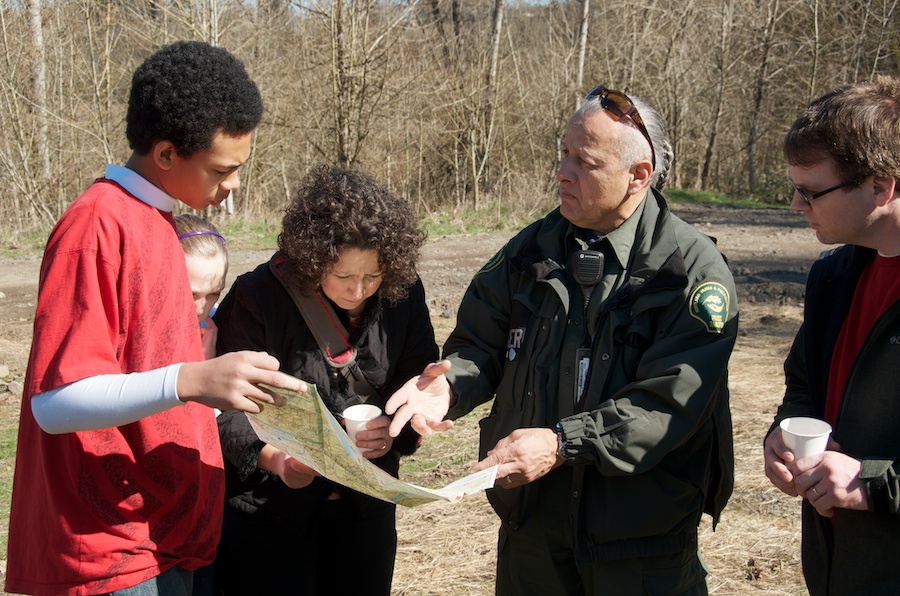 Ranger Barrios shares some of his favorite trails A Peregrine Falcon was on hand courtesy of the Audubon Society

Just a reminder that I’ll be at Oaks Bottom Wildlife Refuge this Saturday as part of the trail re-opening festivities. The event runs in the south meadow near the Sellwood Park bluff from 10am until 1pm on March 9. You can check out the poster for more details.

Additionally, my prints at Blue Kangaroo Coffee Roasters in Sellwood are going to be on display through March, so if you missed a chance to see them in January or February, you get another chance.

And as always, watch the events page for updates!

Look up the word “wildlife” and you can get a range of definitions. Most dictionaries go with a combination of animals and locale:

Wild animals collectively; the native fauna (and sometimes flora) of a region.

Wikipedia takes a bit more of a technical, but also broader, approach:

Wildlife traditionally refers to non-domesticated vertebrates, but has come to broadly reference to [sic] all wild plants, animals and other organisms.

For me, and I think for wildlife photography in general, it’s important to distinguish between wild and captive species. There is a sort of understood ethical practice around this in photography already, sure, but a big part of the experience for me is about how I approach the animals – or how they approach me – and what sorts of behavior they’re exhibiting at the time. Technically, zoo and other captive animals are wildlife. And though I’m generally a supporter of zoos, it’s important to understand the animals housed there and how their behavior and even their appearance can differ from those in the wild. For example, did you know that the commonly observed behavior of raccoons washing their food in water doesn’t happen in the wild?

However, there is still great value for me in seeing captive animals. A great example was this past weekend, when I took a road trip down to the Winston, Oregon area, to visit the Wildlife Safari there. This is an AZA-accredited, free-range, drive-through park featuring animals such as bison, rhinos, giraffes, and camels, plus predators like cheetahs, tigers, lions, and bears (behind a bit more protection, thankfully – though even the free-range bison that briefly ran down a hill towards the car was enough to get my blood pumping). I learned about this park via Portland-based wildlife photographer Laurie Excell’s Wildlife Photography: From Snapshots to Great Shots. Probably the highlight of the trip for me was observing the grizzly bears (also known as brown bears) up close. While at some point I hope to observe them in the wild firsthand, I expect to never be able to do so safely as close as I did this weekend. Seeing these amazing animals rest, play, and interact was a real treat, plus, as always, a way to sharpen the photo skills. 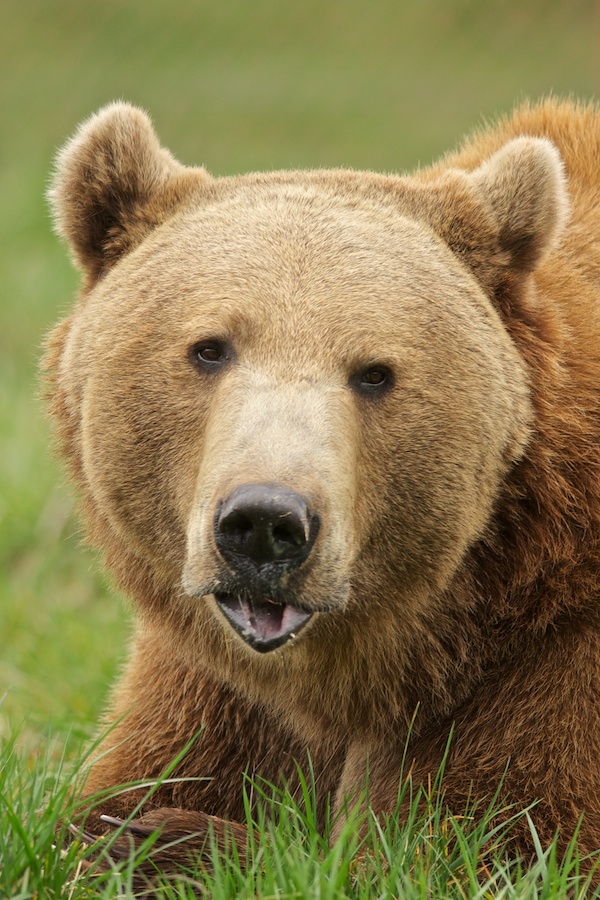 But while these sorts of opportunities are great, the reason I’m drawn to true, in-the-wild wildlife photography is a twofold mission. First, I just enjoy spending the time in the outdoors, exploring, never knowing what I’ll come across, and the associated change of pace from daily routine that comes out of both opportunity and necessity. The second is that I enjoy bringing photos from these experiences back to people who might not have the time, expertise, or desire to experience them firsthand. While I can’t really directly influence the first two of these, time and expertise, I just may have an effect on a person’s desire to see these sorts of things firsthand. And that could lead to their own change of pace, getting outdoors more often, taking an interest in wildlife found near their home or work, or a multitude of other little ripple effects.

So while I can enjoy photographing captive wildlife, for me it’s more about the experience leading up to and embedded in the image than the fact that I got a great trophy shot of a particular animal. I plan on visiting some places like Jewell Meadows Wildlife Area to try and see elk and coyote on their own terms, but it could still be fun to observe a winter feeding there, too. I’m just not obsessed about the potential for shots due to proximity to the animals. The best moments I’ve had with wildlife have been when they slowly let me into their world, aware of my presence and ok with it. Even if I don’t have any keepers that day (and it has definitely happened), I still received the gift of a peek through the wild window into the daily routine of true wildlife.

P.S. I found a great piece in this vein by Dave Showalter entitled Wild vs: Captive Wildlife Photography. He’s a new-to-me voice that I’ll definitely be following from here on out.